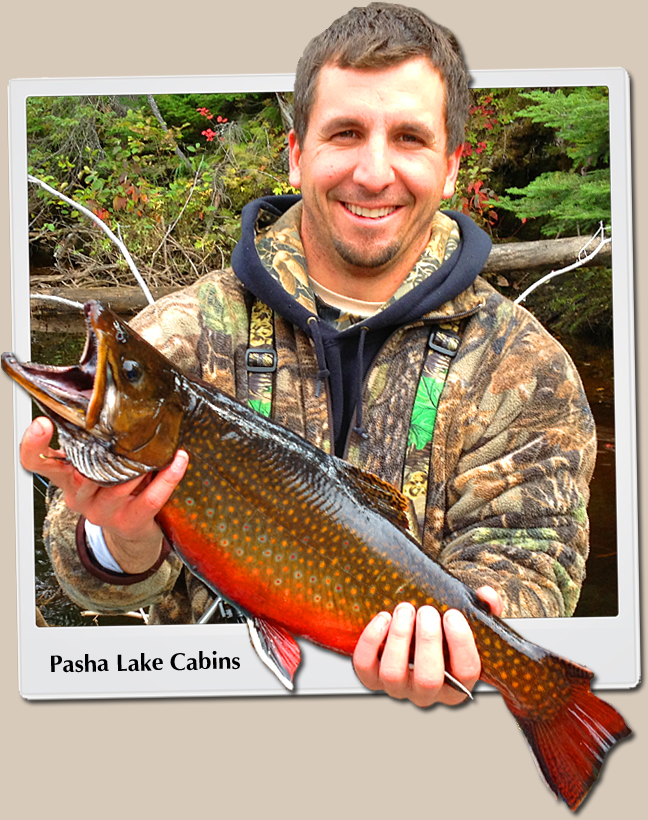 Ontario is home to the best Brook Trout fishing in the world including being home to the World Record caught by Dr. Cook in 1915. Ontario has famous rivers such as the Nipigon River, the Albany River, Dusey River and the Ogoki River to name a few that eventually run into James Bay or Hudson's Bay (on the Ontario side) and are producing world class fishing. There are many lakes with fantastic fishing. All the lakes surrounding Lake Nipigon as well as lakes in Algonquin Park and the Halliburton Highlands are productive. There are also hundreds of streams and spring-fed lakes north of Jellicoe, Armstrong and Nakina that have the best and biggest Brookies in Canada.

Their scientific name is Salvelinus Fontinalis. Most people in Ontario call them Speckles. They are the most beautiful fish in the world and the best tasting of the Char Family. Most have a dark red meat with a flavor that is like no other fish on earth. The best way to cook them is to roll them in flour and fry in butter. The skin is the tastiest part. A 3-pound Brookie is considered a trophy by many. There are a few outfitters listed in this site that can hook you up with 5 and 6-pound fish. On occasion 7 and 8-pounders get caught but a Brookies that big are super rare anywhere in Canada.

Brookies prefer a water temperature of 53 degrees or cooler. With this in mind the Brookies actively migrate to sections of a river with cold springs during the summer and then in the fall move back to the spots where they stay the rest of the year. In lakes the Brookies will go deep to find cooler water in the summer. It's rare for them to go deeper than 35 feet so if a lake's water is not cold at 35 feet deep then most likely it's not a good lake to be fishing. Brook Trout do have a higher tolerance to warm water than most so in the middle of the summer right at dusk they will shoot up to the surface to hit flies and other insects. They don't stay shallow long in the summer.

They are mainly found from the eastern border of Manitoba through Ontario, Quebec and onto the east coast of Canada with the greatest eastern populations being in Newfoundland and New Brunswick. Specs, as they are nicknamed in Ontario, are actually a species of Char and in prehistoric times evolved to be exclusively a sea-run fish. They lived in the Arctic Ocean and North Atlantic Ocean and only traveled into fresh water streams and rivers to spawn. Over a millennium they became distributed from central Saskatchewan through Manitoba and into Ontario and evolved to live permanently in fresh water lakes and streams; mainly streams thus the name Brook.

During the last ice age in Ontario a giant wall of ice stretched right around the border of Hudson's Bay and James Bay. This wall of ice prohibited the arctic watershed from draining water and it formed an enormous lake called Lake Agassiz. This lake eventually covered many of the small lakes and streams and the Brook Trout were free to swim around in Lake Agassiz. Near the end of the last ice age this wall of ice eventually broke with trillions of tons of water per second flowing into Hudson's Bay and the Brookies were swept away with the water. This basically wiped out the major populations in Saskatchewan and Manitoba as well as parts of Northwestern Ontario.

To this day, the previous location of Lake Agassiz is where Brook Trout are at their lowest concentrations as shown on the maps below. There are a few scattered brook fishing lakes that have been stocked in Northwestern Ontario and Manitoba but your best brook fishing opportunities are found North of Lake Superior all the way north to tributaries that flow into James Bay and Hudson's Bay, around Lake Nipigon and east of Lake Huron in the Algonquin Park Highlands and the Halliburton Highlands. There are stream fish in Southern Ontario but they are mainly tiny spring-fed streams that only produce tiny fish. If fishing for a trophy is your goal then you have to head north.

I created Brook Heaven to share photos and brook fishing tips as well as list all the top Brook Trout fishing destination in Ontario. I have lodges, resorts and outpost camps listed by town and whether they are drive-to lodges of fly-in camps. Most camps offer housekeeping accommodation but some offer Full Service American Plan accommodations, which means all your meals and usually guides. If you have any questions about Ontario Brook Trout Fishing please email me at gary@brooktrout.ca