Back in July 21 / 1915, Thunder Bay was called Fort Williams and it was the home of Dr. JW Cook, the man who caught the World Record Brook Trout, also known by most Canadians as the Speckled Trout. (Salvelinus Fontinalis)

Dr. Cook was on a guided fishing trip to the Nipigon River, Nipigon, Ontario when he caught the great fish. The Brook Trout was 14.5 pounds but what is not common knowledge is another 14.0 pound Brook Trout was caught the same day in the same rapids by R. j. Byrnes (may not be true - read below).

News Update - July 18/2019: Betty Brill (Nipigon Museum) and Rob Swainson (MNR) have contacted me about Dr. Cook's fishing vacation. Through their research they have found no documented proof that R. j. Byrnes caught a 14-pound Brook Trout on the same day Dr. Cook caught his record. However, the day after Dr. Cook caught his record Dr. Cook caught two more large Brook Trout that may have spawned the rumor of the second big fish. These two Brook Trout are on display at the Thunder Bay Museum. One trout is 23.5" long, 6" thick and weighed 6.6 pounds. The second trout is 21.75", 5" thick and weighed 5.1 pounds. Legend has it he caught both trout with one cast. It does happen. Over the years there has been a few times where I have caught two fish on one cast. It's always when I am using a lure with multiple hooks like a Rapala.

Click Here to listen to my interview about the World Record Brook Trout controversy on the Fish'N Canada Radio Show - FAN590 AM - Saturday mornings at 8:00 AM. 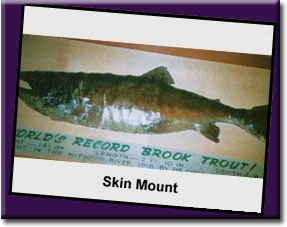 Many people do not believe it's possible for a Brook Trout to get that big. Some were saying it was a Splake, which is a cross between a Brook Trout and a Lake Trout. The Royal Ontario Museum of Zoology in Toronto did examine the fish and certified it to be a genuine pure bred Brook Trout. I myself had a hard time believing it until I found out they are pulling 9 and 10 pound Brookies out of lakes in the Nipigon and Wawa area, and in present times, so an extra 4 pounds in 1915 is not a big stretch. Plus in 1915 there was next to no pollution or fishing pressure.

Also, "a Coaster", which is a Brook Trout that lives in Lake Superior, were much more common in 1915 and these Coaster Brook Trout where well known for becoming huge with many moving up into the Nipigon River throughout the year. Pulp and paper mills killed off many of the Coasters but the population is making a major recovery thanks to conservation efforts by the Town of Nipigon , fishing clubs, the Ministry of Natural Resources and local industry. Dr. Cook's World Record Brook Trout was most likely a Coaster Brook Trout. 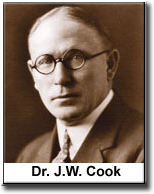